2022’s been a big year for travel, but which airline companies received the most complaints from passengers—and what are they doing about it? What is the number one worst pet peeve for U.S. travelers during a typical flight? A recent data study and survey by Upgraded Points finds out.

AUSTIN, Texas, Dec. 5, 2022 /PRNewswire/ — Upgraded Points’ latest data study reveals the airlines that received the most complaints in 2022, as well as who ranked highest for cancellations, mishandled bags, and delayed arrivals. To find the biggest flight pet peeves, the company also surveyed flyers about their travel woes—From stale air to crying babies, forced small talk, lack of legroom, and more. 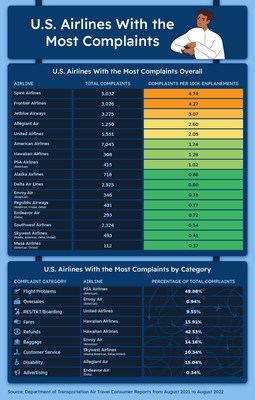 “The biggest pet peeves people have about their inflight trips are usually related to the operations themselves,” said Alex Miller, Founder of Upgraded Points. “This can range from cancellations, delays, and baggage problems. But one of the most interesting questions we asked involved what Americans think they should be owed when major problems occurred. For American travelers, lost baggage is worth more compensation than a delayed flight or annoying passenger incidents. But the whole study is really a fascinating look into the psychology of travelers and how companies are addressing issues that arise.”

Upgraded Points analyzed data from the U.S. Department of Transportation Office of Aviation Consumer Protection’s Air Travel Consumer Reports from August 2021 to August 2022 to find the U.S. airlines with the most on-time arrivals, flight cancellations, and mishandled baggage. The study also surveyed 500 Americans on their grievances when traveling by air: from inflight mistakes to appropriate compensation and more.

Airlines with the Most Complaints Overall

Airports with the Most Complaints Overall

Cancellations: Republic Airways ranked #1 for most cancellations, with 4.3% of monthly flights canceled. Allegiant Air and Spirit Airlines came in at No. 2 and 3.

Delayed Arrivals:  While Endeavor Air leads the pack with the most on-time arrivals (83.8%), just 64% of Allegiant Air flights were on-time this year. Jetblue, Frontier, and Southwest also had some of the most delayed arrivals.

To check out the complete results of the airline pet peeve study along with full lists of the travelers’ complaints by category and airline, specific airline compensation charts, detailed graphs and more, please visit the full study HERE.

Headquartered in Austin, Texas, Upgraded Points is a travel company that provides insider strategies for maximizing travel points and rewards. Launched in 2016 by Alex Miller, Upgraded Points uses targeted research efforts and in-depth studies to give travelers, as well as those looking to travel, a real understanding of how to maximize their points and miles. Learn more at: www.UpgradedPoints.com.