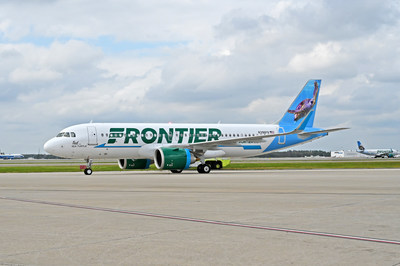 “We’re thrilled to welcome Ted the Loggerhead Sea Turtle to our fleet,” said Tyri Squyres, vice president of marketing at Frontier Airlines. “All Frontier plane tails feature an animal with a unique name and backstory, many of them from endangered or threatened species. We’re proud to partner with Visit Orlando and wonderful facilities like SEA LIFE Orlando Aquarium to highlight animal conservation in the greater Central Florida area.”

In 2021, SEA LIFE Orlando’s Ted the Turtle won Frontier Airlines’ ‘Who is Orlando’s Most Loved Animal’ promotion resulting in the honor of the animal’s likeness to be featured on a new aircraft. Ted garnered the most votes between Central Florida Zoo’s Ella, the Florida black bear; Gatorland’s Larry, the American alligator; and Wild Florida’s Flurry, the albino hatchling alligator.

“SEA LIFE Orlando is excited to partner with Frontier on this amazing opportunity,” said Kayla Cristell, lead aquarist at SEA LIFE Orlando Aquarium. “It’s a unique honor for Ted, our beloved SEA Turtle, to be recognized as Orlando’s most loved animal. Our partnership represents a mutual commitment to telling the stories of incredible animals, and bringing conservation awareness and education to the public.”

“As the likeness of Orlando’s Ted the Turtle takes flight on the new Frontier Airlines plane, we hope his story inspires travelers to visit the now famous loggerhead turtle here in Orlando and learn more about conservation and animal rescue efforts throughout our destination,” said Casandra Matej, president and CEO, Visit Orlando. “We are grateful for Frontier Airlines’ commitment to raising awareness for animals like Ted and programs working to preserve Florida animal species.”

SEA LIFE Orlando Aquarium’s Ted, the loggerhead turtle, is a rescue turtle who was released multiple times back into the wild, however he was not displaying behavior consistent with survival on his own. Hence, SEA LIFE Orlando Aquarium became his forever home. Ted’s name is an acronym for Turtle Excluder Device. TEDs are escape hatches in fishing nets that allow turtles to escape if they are accidentally trapped. Ted, the sea turtle, was one of the first turtles to test the TED device and played an important role in pioneering technology to help protect the endangered sea turtle species.

Each attraction facility that participated in the contest provides Orlando visitors the opportunity to view Florida wildlife and learn about programs designed to protect them. Consumers who voted during the promotion were entered into a drawing to win free flights on Frontier, which operates more nonstops from Orlando than any other airline.

As the destination celebrates animal conservation in Orlando, travelers can visit Ted the Turtle at SEA LIFE Aquarium during their next Orlando vacation by taking advantage of Frontier Airlines’ exclusive Friends Fly Free sale, launching today. Discount Den® Members who buy one Discount Den Fare will get one free to Orlando. To qualify, the purchase must be made by Dec. 13, 2022, travel between Jan. 4 – Feb. 28, 2023, and use promo code: FLYFREE. This exclusive promotion is valid on select dates and routes. Other terms and conditions may apply.

DIVE DEEP! SEA LIFE Orlando Aquarium offers a wave of underwater adventures with sea creatures from around the world. Come face-to-fin with thousands of fish, sharks, stingrays, sea turtles, and many more. Prepare for a world of glittering scales, humongous tentacles, and razor-sharp teeth. Get ready to plunge deep into the oceans, explore our 360-degree ocean tunnel, meet our friendly rescue sea turtle, and touch exotic starfish and anemones. You can even jump behind the scenes and see all it takes to keep an aquarium running. For tickets and more information on this amazing sea adventure, go to VisitSeaLife.com/Orlando or follow us on social media @SEALIFEOrlando.

Frontier Airlines (NASDAQ: ULCC) is committed to “Low Fares Done Right.” Headquartered in Denver, Colorado, the company operates more than 110 A320 family aircraft and has the largest A320neo family fleet in the U.S. The use of these aircraft, Frontier’s seating configuration, weight-saving tactics and baggage process have all contributed to Frontier’s continued ability to be the most fuel-efficient of all major U.S. carriers when measured by available seat miles (ASMs) per fuel gallon consumed. With more than 230 new Airbus planes on order, Frontier will continue to grow to deliver on the mission of providing affordable travel across America.

Visit Orlando is The Official Tourism Association® for Orlando, the most visited destination in the United States, Theme Park Capital of the World® and No. 1 meeting destination in the country. A not-for-profit trade association that brands, markets and sells the Orlando destination globally, we represent more than 1,200 member companies comprising every segment of Central Florida’s tourism community.

Visit Orlando connects consumers and business groups with all facets of Orlando’s travel community, whether for a vacation or meeting. Home to seven of the world’s top theme parks — as well as refreshing water parks, activities to connect with nature, vibrant neighborhoods, a dynamic dining scene with Michelin recognized restaurants, and a robust calendar of entertainment and sports events — Orlando is a diverse, welcoming and inclusive community for all travelers. Find more information at VisitOrlando.com or OrlandoMeeting.com.