KEMBLE, United Kingdom, Dec. 23, 2022 /PRNewswire/ — The UK’s Civil Aviation Authority (CAA) has granted a permit to fly for ZeroAvia’s Dornier 228 aircraft, which has been retrofitted with its prototype hydrogen-electric powertrain. ZeroAvia secured the permit to fly following an extensive ground testing campaign and a rigorous review of the full development program. 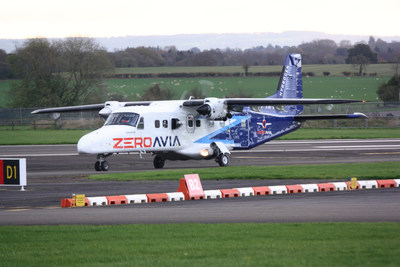 It means that ZeroAvia, the leader in zero-emission aviation, can now begin the first test flights of its 600kW hydrogen-electric powertrain. The 19-seat twin-engine aircraft has been retrofitted in an engineering testbed configuration to incorporate ZeroAvia’s hydrogen-electric engine powering the propellor on its left wing, operating alongside a single Honeywell TPE-331 stock engine on the right for appropriate redundancy to allow the safe testing of the novel propulsion technology.

The test flights are set to be a landmark achievement for ZeroAvia and the HyFlyer II project, a major R&D program backed by the UK Government’s ATI Programme, which targets the development of a 600kW hydrogen-electric powertrain for 9-19 seat aircraft.

For this testing program, ZeroAvia has worked with the CAA in meeting a far more stringent set of requirements when compared to the E-Conditions framework ZeroAvia had used for its 6-seat prototype in 2020. Part 21 is an industry-standard term used to describe the regulatory approval of aircraft design and production organizations, and the certification of products, parts, and appliances for aircraft. Securing this permit to fly is a significant milestone in ZeroAvia’s path towards commercialization.

Val Miftakhov, Founder & CEO of ZeroAvia said: “Earning our full Part 21 permit to fly with the CAA is a critical milestone as we develop a zero-emission aviation propulsion system that will be the most environmental and economical solution to the industry’s climate impact. We’re going to be starting 2023 in the best way possible, by demonstrating through flight that true zero-emission commercial flight is much closer than many think.”

It will pave the way for a commercially certifiable configuration for ZA600 to be submitted by the end of 2023, ahead of delivering powertrains for the first commercial routes for 9-19 seat aircraft to commence by 2025. With 1,500 engines under pre-order, partnerships with seven aircraft manufacturers and multiple fuel and airport partnerships, ZeroAvia is well positioned to lead the industry’s transformation to a clean future.

When test flights begin in January, ZeroAvia’s Dornier 228 testbed is expected to become the largest aircraft to ever fly using a hydrogen-electric powertrain.

ZeroAvia is a leader in zero-emission aviation, focused on hydrogen-electric aviation solutions to address a variety of markets, initially targeting a 300-mile range in 9–19 seat aircraft by 2025, and up to 700-mile range in 40–80 seat aircraft by 2027. Based in the UK and USA, ZeroAvia has already secured experimental certificates for its two-prototype aircraft from the CAA and FAA, passed significant flight test milestones, secured a number of key partnerships with major aircraft OEMs and major global airlines, and is on track for commercial operations in 2025. The company’s expanding UK operations are supported by grants from UK’s Aerospace Technology Institute and Innovate UK, and ZeroAvia is part of the UK Government’s Jet Zero Council. For more, please visit ZeroAvia.com, follow @ZeroAvia on Twitter, Instagram, and LinkedIn.

About the HyFlyer II Project:

The HyFlyer II project will see ZeroAvia develop a certifiable hydrogen-electric powertrain that can power airframes carrying up to 19 passengers. To do this, it will collaborate with two partners, the European Marine Energy Centre and Aeristech. The HyFlyer II project will conclude with another world’s first hydrogen-electric flight by ZeroAvia in a 19-seat aircraft, with a 300 nautical mile flight in 2023. The HyFlyer II project is part-funded by the UK Government’s Aerospace Technology Institute’s (ATI) programme, supported by the Department for Business, Energy and Industrial Strategy and Innovate UK.